Agreement in MLB for the 2020 season

In recent days MLB and the MLB Players Association ( MLBPA ) reached an agreement to establish MLB season player compensation in the event the 2020 season is canceled due to the COVID-19 pandemic as well as other changes related to the season itinerary and the first-year player draw (MLB Draft) that takes place annually in early June.

Among the agreements applicable to MLB players are:

At first sight, both team owners and players benefit. Players receive credit for their length of service time in 2019 in addition to part of their salary in the event of the season being canceled while the owners avoid disputes with players over their salary and create a legal framework for handling compensation. / vc_column_text]

On the other hand these agreements also bring significant changes to the 2020 First Year Player Draw (MLB Draft) .

These changes will impact the players who have a commitment to a college or university to play in 2020-21 as well as players with the possibility of being selected and signed in the Draft. Not only are draft selections limited, but the NCAA has already approved to allow the schools to provide spring-sport student-athletes an additional season of competition and an extension of their period of eligibility without any provided financial aid counting against the 11.7 athletic scholarships available at the NCAA D1 baseball level. This means that many players projected to graduate will be able to return to their respective universities creating a greater amount of talent competing for participation, further impacting the “pool” of high school players who generally have a 2% probability of playing at the NCAA level. D1. As illustrated below, 11.7 scholarships are offered at the NCAA D1 level and 9 at the NCAA D2 level, while both the NCAA and NJCAA levels D3 do not offer athletic scholarships.

How are Players in PR impacted?

On the other hand, the prospect of Puerto Rico that does have the probability of signing a professional contract will be even more impacted in this upcoming Draft 2020 as in the projected for 2021. Some without an average academic profile will see their options of aspiring to an NCAA or NAIA university limited, especially if the player isn’t fully bilingual and the university does not offer an ESL (English Second Language) program. Others may be forced to accept a below-expected bonus to sign when for Draft 2019 a player selected between rounds 11-40 could have aspired to a sign a for full pick slot value of $125,000, or even more in certain cases, now will be limited to accepting 1/6 of that.

Finally, they could consider signing professional contracts in international leagues, such as the case of Carter Stewart, a JUCO pitcher who signed a $6 million contract with the Fukuoka SoftBank Hawks of the Japan Professional League in 2019, the first time that an amateur American player signed professional directly with a team from the Japanese league. This could become a trend if MLB does not release certain Draft controls and allows teams greater flexibility and investment power in the coming seasons.

We must also remember that by 2022 there is a possibility that MLB will hold an International Draft, changing the current amateur talent acquisition mechanism in Latin American and Caribbean countries such as the Dominican Republic, Venezuela, Mexico, Panama, Curacao, etc. Currently, these players, although with certain limits, can sign as free agents for amounts up to $ 300,000 without the team incurring any penalty. Being subject to a Draft eliminates the incentive of a scout signing a player directly vs. going through the draft, similar to what happened with PR when the draft was implemented in 1989 and affected the island’s steady flow of talent produced locally and who starred in MLB.  Around the mid-late ’80s, prior to the integration of the draft in PR, we produced outstanding players, among them hall of fame, such as Ivan Rodriguez, Roberto Alomar, Edgar Martinez, Juan “Igor” Gonzalez, Carlos Delgado, Bernie Williams, Carlos Baerga and Javy Lopez, among others.

When analyzing the Draft results in PR for 2012-19, only 10% of all the selected Puerto Rican players (mostly from high school) have been selected in the first 5 rounds of the Draft.

We chose 2012 because it was the first year of the collective bargaining agreement (CBA) signed prior to that season between MLB & MLBPA that integrated penalties (illustrated) to MLB teams that signed players for bonuses greater than those established according to the value of each selection and the team’s pool $.

The bulk of Puerto Rican player selections have been between rounds 11-20 that occur on what we call the 3rd day of the draft. When they are chosen after round 10, a team that selects the player will not be forced to sign it as it happens in rounds 1-10 where if the team does not sign the player they lose the $ of the value of that selection.   Nothwisthanding, any dollar spent on rounds 11-40 for a bonus over $ 125,000 paid to a player counts against the teams’ draft pool $. This MLB changes essentially eliminate that option, and the unelected player in rounds 1-5 will not be able to sign for more than $20,000.

What should we start doing about College Baseball Recruiting in PR?

This could also represent a new opportunity for the Puerto Rican prospect. Improving their academic performance starting in 9th grade may eventually match them better academically with the US high school player and open doors for them to study and play at the NCAA D1 level with a better GPA and score on college entry tests such as ACT & SAT.

Another area where they can refocus to eventually aspire to better academic opportunities at the university level is in placing development over exposure.  We have previously written on this topic which is one of the bases of our philosophy when evaluating the recruitment process to play at a high collegiate level. While it is true that exposure is important it is also true that if the player has not developed properly efforts to seek exposure can be in vain. College-level baseball is highly competitive at all levels, not just D1 & D2. It is important to have a focus on avoiding injury risk factors from an early age so that the player is then well-positioned and can develop with the necessary support. Eventually, it will be time to get exposed at the talent showcase circuit indicated but before that, at ages 12-16 pursuing exposure opportunities if the player is not ready yet can be contraindicated and create an expectation of results (recruitment, rankings, etc) which is more intangible than what they can control.

We understand that the recruitment process really begins when the athlete begins to develop at ages 7-12 years. Without an established base and, above all, without prevention of overuse and injuries from those ages, the player could already be compromised physically when his exposure phase arrives. For this reason, together with certified trainer Daniel Vendrell and AREA Sports Development, we seek to work with children responsibly and create a secure foundation for their physical development. Not everyone will be able to play at the university level or sign a professional, but we will avoid compromising them physically from an early age by putting their development over competition at that age.

Each player has a different strategy to manage their recruiting process. Therefore, it is important to be properly informed when considering whether exposure or development is established as a priority.  To be successful, the recruiting process must be directed to the player’s academic and athletic goals and abilities.

If you are interested in playing at the 4-year university level, start preparing for 9th grade. Contact us and coordinate a free virtual orientation to your team. 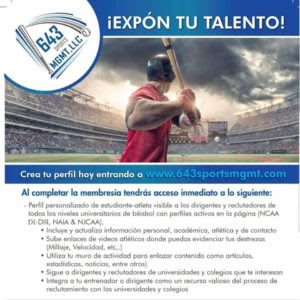 EXPOSE your talent to over 100+ FREE College Coaches & Recruiters

What services do we offer?

How can I get in contact with 643 for more information?

Go to www.643sportsmgmt.com and start your recruiting process TODAY!

Coaches & Players are FREE to join our College Baseball Recruiting Platform. We can help!

Check out our services